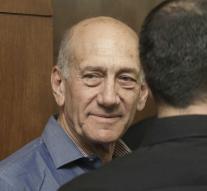 jerusalem - For the first time in history vanishes an Israeli former Prime Minister behind bars. Ehud Olmert has to eighteen months in jail because of bribes. He was initially sentenced to six years in prison, but the Supreme Court today overturned a portion of that sentence.

Olmert must report on February 15 in prison. He was convicted of corruption during his tenure as mayor of Jerusalem and minister of Trade and Industry. The politician accepted money in exchange for speeding up the procedures for building a large apartment complex in Jerusalem, Holy Land.

The bribery came through his secretary, whose Olmert the judge should have been informed. His former employee was the key witness in the trial. The court in Tel Aviv had convicted him last year to six years in prison for accepting some 150 000 euro. The Supreme Court has now ruled that only 13 000 of them can be proved.

In total, the developers paid a multiple of local officials. It was one of the biggest corruption cases in the history of the Jewish state.

Olmert is awaiting a prison sentence of eight months in another case. He was earlier this year found guilty of accepting bribes from an American businessman. That case has yet to come before the Supreme Court.