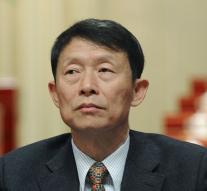 - A former top official from China to twelve years in prison convicted of corruption. It is Li Chongxi, reported the Chinese state.

For years he was the aide of former minister and security chief Zhou Yongkang. Which was in turn this year for life for corruption, leaking of state documents and abuse of power.

Li Chongxi was once the chief adviser Zhou in the province of Chengdu. He belongs to a long line of politicians who were good friends with Zhou, but now punished with a powerful anti- corruption campaign of the ruling Communist Party of China.

Earlier, for example, Jiang Jiemin was sentenced to sixteen years in prison. Jiemin is the former president of the China National Petroleum Corporation, the huge Chinese state-owned trading and production of gas and oil.