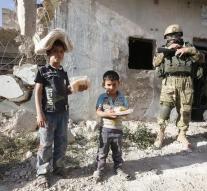 aleppo - After the beginning of a new truce stopped the fighting in the northern Syrian city of Aleppo. The Syrian Observatory for Human Rights reported Thursday that there have been no violations of the cease-fire. The local television station Halab Today said that there is peace in the city.

The United States and Russia, an ally of Syria had exerted strong pressure for a new cease-fire after the violence in Aleppo had escalated in recent days. According to Syrian state media, the 48-hour ceasefire in the early morning hours came into force.

In other parts of the country, which is already more than five years torn apart by war, it was already agreed a cease-fire.