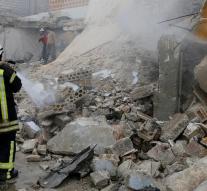 damascus - The partial ceasefire in Syria Thursday evening officially commenced at 23.00 am (Dutch time). For the third time this year, several warring factions agreed to silence the guns. The initiative came this time from Russia and Turkey. Unlike the previous times, the United States was not involved in the negotiations.

The first two files did not hold. Now is not to expect instant peace, the fight against Islamic State're going through and also the influential jihadist group Jabhat Fateh al-Sham (the former al-Nusra) is not a party to the file. That makes the situation beforehand complex because the jihadists often collaborate with other rebel groups.

The largest rebel group that claimed Russia had agreed was the cease-fire, Ahrar al-Sham, left Thursday night know ' have multiple reserved. For now, the signature of the missing militia, which has about 16 000 fighters.