Home / World / Cease-fire Lebanon in violation of IS 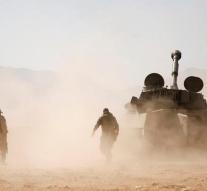 beirut - The Lebanese army and the Shiite militia Hezbollah promulgated a ceasefire in the struggle against Islamic state on the border with Syria on Sunday.

According to the army, fighting must stop negotiating Lebanese soldiers who have been detained. The prisoners have been in the hands of IS since 2014 when soldiers of the terrorist movement had taken a short time to the border town of Aral.

The Lebanese army earlier this month began an offensive against an enclave controlled by IS. Hezbollah drew up with the Syrian army. Hezbollah TV station announced Sunday that the militia also participated in the ceasefire.