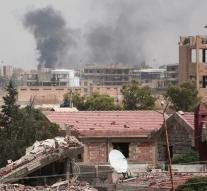 - In the city of Hasaka in northeastern Syria Tuesday discussed a cease-fire.

Which have provided a Kurdish officer and the Syrian state.

Kurdish YPG militia managed according to the Syrian Observatory for Human Rights in recent days almost to gain control of the entire city. Government forces still occupy only a few buildings in the center. Also five surrounding villages fell into the hands of the YPG.


The YPG is an important part of the Syrian Democratic Forces (SDF), a United States-backed alliance that fights against the terrorist organization Islamic State. Turkey sees the gains of the YPG with sorrow. According to Turkey, the group is an extension of the outlawed Kurdistan Workers Party (PKK).