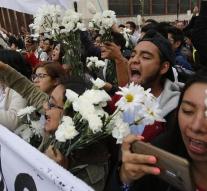 bogota - Colombian President Juan Manuel Santos has an agreement with the FARC movement across the cease-fire extended to the end of the year.

He hopes in the meantime to find a solution to the impasse that arose after the Colombian population voted in a referendum by a narrow majority against peace. The agreement was negotiated four years, but found a majority of citizens that the conditions would be too mild for FARC members.

The agreement was extended until 31 October. Santos: ' There are both in the army and the guerrillas young people hope they never have to fire a shot. Reason for me to renew the agreement. '

The Government of Colombia also begin peace talks with the ELN, the smaller of the two guerrilla organizations in the South American country. The negotiations are conducted in Ecuador.