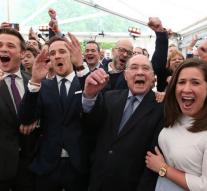 dusseldorf - The Christian Democratic Party of German Chancellor Angela Merkel, the CDU, won the elections on Sunday in the state of North Rhine-Westphalia (NRW) according to exit polls.

According to opinion polls, the ruling coalition of the Social Democratic SPD and the Greens would have suffered major losses. This indicates an end to Prime Minister Hannelore Kraft's government (SPD) and harms the opportunities of the SPD in the national elections in September.

According to the polls in NRW, the liberal FDP is at a profound profit. The right-radical Alternative für Deutschland has enough votes to come to parliament in Düsseldorf.

The State Social Democrat Prime Minister, Hannelore Kraft, announced Sunday's departure as deputy chairman of the SPD and as party leader in her state. In her opinion, she assumes responsibility for the heavy defeat that her party has suffered in NRW on Sunday in the state elections.