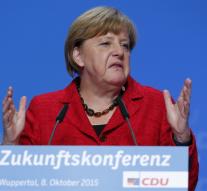 - Despite the growing criticism of its migration policy German chancellor has her CDU party still firmly behind him. A poll showed that 82 percent of her supporters were satisfied with her ​​actions.

18 percent are dissatisfied, as shown by the poll commissioned by the magazine Stern. Many CDU members ( 81 percent ) believe that Merkel during the elections in 2017 should again candidate for the chancellor shelf. Merkel next month decade in power in Germany.