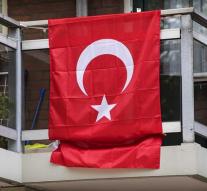 cologne - The German Christian Democrats are struggling with the demonstration supporters of Erdogan Sunday to keep in Cologne.

,, The domestic politics of Turkey has no place in Germany, 'CSU Secretary Andreas Scheuer said in 'Der Spiegel'.,, Who wants to be involved in the Turkish domestic politics, better leave the country and return to Turkey. '

Wolfgang Bosbach, the interior expert of the CDU, said in the same magazine that the protest might but should be banned.,, The hurdle to ban a meeting is known as very high. But if the responsible authorities have concrete indications that the planned demonstration could lead to criminal acts or violence, the adoption of such a ban should be seriously considered. ''


The Union of European Turkish Democrats (UETD) has announced the demonstration with the theme 'military coup in Turkey. The organization expects, according to the police 15. 000 participants. The UETD supports the AK Party Erdogan, who rules largely by decree since Thursday.