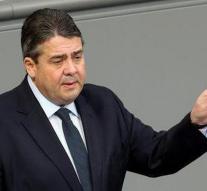 istanbul - Turkish Foreign Minister Mevlüt Çavusoglu thinks it is running out of crisis with Ankara and Berlin. During a visit to northern Cyprus, he said he was still on Thursday with his German colleague Sigmar Gabriel. 'I still call him my friend. You can not have the same opinion about everything, but what matters is that you can talk about it. '

Çavusoglu said that their contact was not broken in difficult times. 'We call each other whenever we want. In addition, we communicate via SMS, so with short messages if there is a subject. He writes me and I write him. '

Apart from this reconciliation tone, the Turkish minister also criticized Gabriel's statements. 'Germany needs to know that threats and chantage in Turkey will not be heard. '