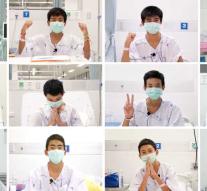 chiang rai - The twelve Thai big boys and their coach are not allowed to watch the final of the World Cup live. That is what the hospital in Chiang Rai determined. According to the hospital, the duel between France and Croatia starts late in the evening.

The boys must first recover from the hospital from their perilous escape from the cave. The hospital also does not want the boys to look at a screen too long. The hospital allows the competition to be recorded so that the boys can still watch later. That reports an anonymous source in hospital against Reuters news agency.

The World Cup final in Moscow starts at 22:00 local time in Thailand. FIFA world football association invited the boys to attend the final, but for medical reasons this is not possible.

The boys from the soccer team 'Wild Boars' were locked up for more than two weeks in a flooded cave in northern Thailand. In a complicated rescue operation, which gripped the world, they were all brought out alive. The first boys, between 11 and 16 years old, are expected to leave the hospital on Thursday.

The boys are also invited to attend a Manchester United game at Old Trafford in the future.