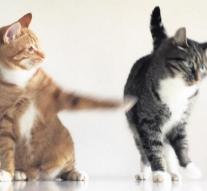 santa clara - A cat hater disappears sixteen years behind the bars for killing and sexually abusing 21 cats, reporting US media. The perpetrator, Robert Farmer, 26, began two years ago in Santa Clara with his series of atrocities. Most animals were abducted near a park and then found dead dead.

In September 2015 the mysterious disappearances began. Soon rumors went near a cat's bell. The evidence that there was a human being became stronger when a bleeding cat was found with a non-animal bite. Another cat who did not survive was found in a plastic box in a shoe box located a mile away.

Farmer denied in a statement that he had something to do with the case. 'It was not me. To me, it feels like another man has committed these crimes, 'said his lawyer, who presented the statement in court. Framer would have been confused at the time of his deeds. The judge came to the high cell punishment because the cat hater would constitute a danger to society.

The cat hater was arrested a month later. He was found sleeping in his car, with a dead cat on the driver's seat. The interior of the car was under the blood. A knife and gloves were found in the car. Family and acquaintances of the perpetrator stated that they often felt unsafe in his presence.

The judge ruled that, after his release, Farmer could not be near cats for ten years. Even in the park where he interferes with the beasts, he can not stand anymore.

There were many cat bosses in the lawsuit. Some of them were in tears. 'I've never been able to say goodbye to GoGo. It was such a sweet beast. She never hurt a fly. '