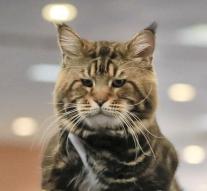 waynesboro - A big mystery in the American town of Waynesboro: someone abducts cats, shaves their belly, cross and legs, and then returns the animals to the owner.

Since December last year, seven cats have already undergone this unwanted shave. In addition to the missing hair, nothing is wrong with the animals. They are quite terrible, said police commissioner Kelly Walker. Shearing is happening according to her with 'surgical precision'.

The police found the mysterious abductions on the track by a boss seeking clarification. He hung posters to warn cat owners for the 'catnapper'.

Police chief Walker blows the motive for shaving in the dark. The only agreement between the cats is that they are all well-groomed and without exception castrated or sterilized. In one case, a cat was abducted and shaved twice.

The Commissioner has no idea how to solve the razor mystery. 'The best solution is probably that the one who does this just stops with it. '