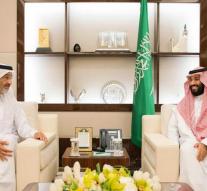 doha - Five people were arrested for hacking Qatar state press office. The arrests must prove that a diplomatic relieves a misunderstanding.

The five people would have broken into the press office in May and published statements by the head of state. These statements, according to Qatar fake, led to a conflict with other countries in the region.

According to the Qatar, the five were recently arrested in Turkey. It is not known who they are and where they come from.

The state press office QNA wrote in May that the emir of Qatar had expressed positive opinion about Iran, an arch enemy of most Arab countries. As one of the few countries in the region, Qatar has good ties with Iran. After the message, countries like Saudi Arabia and Egypt cut all ties with Qatar. The United States and Kuwait try to mediate.