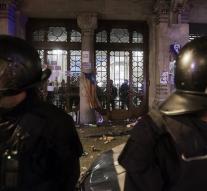 madrid - The Spanish Ministry of the Interior has attracted the coordination of all activities of the police in Catalonia on Saturday. The regional Catalan police force, the Mossos d'Esquadra, is temporarily under the command of the paramilitary Guardia Civil on the instructions of the prosecutor.

The measure applies according to the newspaper La Vanguardia in any case until 1 October, the date on which the regional government of Catalonia has issued a referendum on independence by the Spanish court.

The Catalan Interior Minister, Joaquim Forn, refused to make a decision. It is the question of whether the regional government and the Mossos can oppose the decision. According to Spanish law, the national police can take charge of the police of an autonomous region during a joint operation.