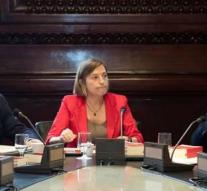 madrid - The parliament of Catalonia decides Wednesday whether a debate is being held about the independence of the region. Two Catalan parties for independence, the Junts Pel Si and the CUP, argue for a debate on Monday.

During that debate, even in the case of these parties, independence could be proclaimed, the Catalan newspaper La Vanguardia writes. However, the parliamentary board must formally determine whether and when the outcome of the referendum on spatial separation is spoken.

As far as Madrid is concerned, this is not a question at all. The Spanish Supreme Court has rejected the referendum as unconstitutional. Premier Carles Puigdemont speaks the Catalans Wednesday evening via the TV.