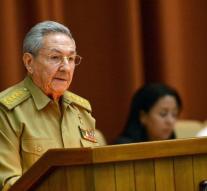 havana - Cuban President Raul Castro has admitted that his country is experiencing economic problems. That said Castro in parliament.

The crisis, according to him not as serious as that followed the collapse of the Soviet Union, the then main trading partner of the Caribbean island.,, We do not deny that there are consequences even more serious as it was then. But we are prepared and in better shape to them to be able to, '' says the Communist head of state.

The low oil prices and falling profits on the export of sugar and nickel are the main causes of the problems. Yet Castro said not to cut back on social spending, such as in education and health services, which are free for all Cubans.


economic growth of 2 percent of the Cuban government expects this year. Last year this was 4 percent.