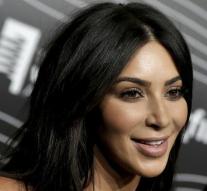 paris - Searches at the seventeen people were arrested Monday in connection with the raid on Kim Kardashian, have yielded interesting information: at one of the detainees was found a sum of 300,000 euros in cash.

The jewels were stolen from the hotel room of the American reality star, have not been recovered. But police suspect that the large amount of money earned by selling a portion of the jewelry. When searches were also incriminating documents and found a weapon.

Meanwhile, also leaked the names of some detainees, including those of two brothers who supplied the gang of important information. Michael and Gary Madar, who both work for a car rental company where the Kardashians use when they are in Paris, probably knew that Kim Kardashian was alone in her luxury hotel room. The gang could strike because her bodyguard at the time with her sister Kourtney was to a nightclub.

The star was robbed by five men dressed as police. They tied her hands and feet and locked her in the bathroom when they searched her hotel room. The robbers took 10 million of jewelry along. Kardashian was terrified, but came with a fright. They need to come back to Paris to confront her attackers.

Seventeen people, including three women and two agents from the diamond environment, were arrested Monday morning early. This morning renewed their appeal, this must continue until Friday morning.