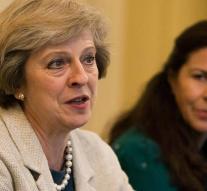 london - The brand new British prime minister Theresa May has a lot left to make a success of the Brexit. Households in British areas where shale gas can be extracted, in exchange for the gas cash amounts of five figures.

Families receive bonuses of up to 13 000 pounds (the equivalent of more than 15 000 euros) to boost gas production, British media reported Sunday. According to environmental critics sums are nothing more than a bribe.

May hopes the radical plan to boost the British economy. The prime minister will officially announce its plan probably Monday as it sounds.