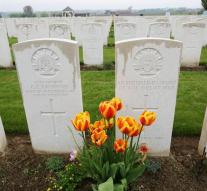 ieper - Passendale battlefield did not know its appearance. That's what British prince Charles said on Monday at the Tyne Cot military cemetery in the West Flanders Ypres. There, six thousand relatives and invited guests, including the Belgian royal couple and British Prime Minister Theresa May, remembered the third battle of Ypres a century ago.

The bloody battle of Passendale, a village near Ypres, lasted from 31 July to 10 November 1917. There were more than one hundred thousand British and German soldiers. Tyne Cot Cemetry is the largest military cemetery of the Commonwealth in the world.

'We return to the battlefield to honor all those involved in this battle under the miserable conditions,' Charles said, replacing his mother, Queen Elizabeth II. His son William and his wife Kate were also present.

The ceremony began with a musical version of the poem 'In Flanders Fields' of Canadian military doctor John McCrae, describing how the poppies flourish among the dead. The poppy became the honor in the Anglo-Saxon world for the fallen in WWI and later conflicts.