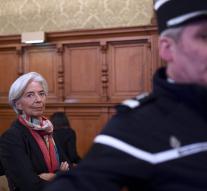 paris - The prosecutor in the case against Christine Lagarde, president of the International Monetary Fund, aims for acquittal. Jean-Claude Marin said Thursday that the interrogations have yielded no evidence for the charges and that he is against a conviction.

Lagarde is suspected French in 2008 as Minister of Finance and Economic Affairs failed to intervene in a compensation scheme for Bernard Tapie. That the state bank Crédit Lyonnais businessman at the time was 400 million euros after a dispute over the sale of its majority stake in the German sports company Adidas.

Monday began the trial of Lagarde in Paris.