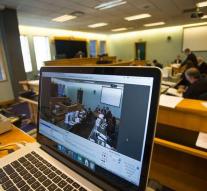 - "The hearing on the extradition of Megaupload boss Kim Dotcom attracts very few viewers. About 6,000 people found their way to the YouTube stream while Dotcom still has almost half a million followers on Twitter."

"Dotcom himself was on Twitter nonetheless excited about the viewership. '' For most people, my hearing dull. But for those looking for something to copyright legislation is a highlight. 6,000 viewers daily. Pretty big courtroom. ''"