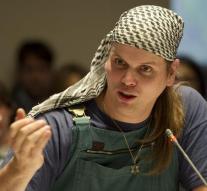 - The Berlin police trying to get with might clarify the facts in a remarkable murder with Gerwald Claus Brunner, a prominent member of the Pirate Party, as protagonist. The colorful and controversial politician was a 29-year-old man who had accused him of stalking, to have been living in a house in Wedding.

A few days later he hit in his own apartment in the Steglitz district committed suicide. Monday there were two bodies were found in different rooms.

According to the newspapers Bild and Berliner Zeitung, Claus-Brunner (44) the body of the victim, of whom it is established that he died a violent death, drove through Berlin in a sting cart. ' The body must somehow be transported, '' confirmed a spokesman for the public prosecutor on Wednesday.

Claus-Brunner became famous as a member of parliament by at public appearances invariably wear dungarees and a headscarf. He was since 2011 in the Berlin parliament. At the state election, the Pirate Party received last weekend insufficient support for a seat.