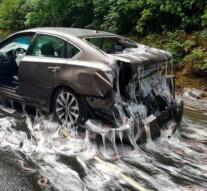 portland - In an accident with a lorry truck, four cars were buried under the mucus. The bizarre accident took place on a highway at Portland in the state of Oregon.

Through a tilting truck there were three tons of eel on the hot road. Nobody got injured in the crash, but motorists looked strange when they stepped into a thick layer of mud when they got out. 'It was very dirty,' says one of the passengers against CBS.

According to the authorities, the animals release the mucus as soon as they feel threatened. One of the cars involved was completely under the mucus. The primitive fish is considered to be a delicacy in South Korea and China. To clear the mess, the road was closed for hours.