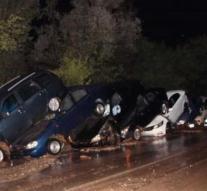 sudak - Dozens of cars are stacked on top of each other after heavy mudflows on the Crimea. On social media, the bizarre images of about fifty car wrecks have been circulating since Friday, which were a play ball for the wild water.

Around the city of Sudak, forty households had to be evacuated. The highway towards the capital of Simferopol changed in some places in a large scoop When the water was slightly low, traffic was still stuck for hours.

The damage to the infrastructure is huge due to the intense heaps of noise. The Suuksu River thus went beyond its banks. In Sudak the state of emergency has been declared. As far as known, no victims have fallen.