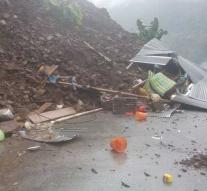 la paz - On a mountain road between Caranavi and Yolosita in Bolivia, eight people were killed on Saturday when their cars were dragged into the abyss by mudflows. Seventeen people were injured.

Extreme rainfall has plagued the area northeast of the capital La Paz for several days and led to multiple flooding in the Caranavi region. Dozens of people have had to leave their homes and have been evacuated.