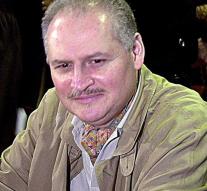 bern - Venezuelan guerrilla Carlos the Jackal, better known as Carlos the Jackal, may move freely in the seventies in Switzerland because of a non-aggression pact 'between the Swiss government and the Palestine Liberation Organisation (PLO). That says Sánchez in a telephone interview with the Swiss newspaper
Neue Zürcher Zeitung .

Sánchez was for years one of the most wanted terror suspects. During a passport control at the airport in Zurich, he saw a poster of himself that 'wanted' was on. Yet he entered the country without problems with a false passport.

Sánchez is best known for the kidnapping in 1975 at the headquarters of OPEC, where three people were killed. He is now serving a life sentence in France.