Home / World / Caring for Poland lives wide in the EU 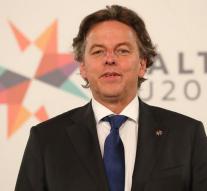 brussels - Many EU countries are worried about the Polish government's involvement with the judiciary in the country. Criminal measures are not yet addressed. This was shown in Brussels on Tuesday after the first consultation of the Ministers of European Affairs on the issue.

Certainly seventeen ministers took the floor in a 'very sensitive' debate, said Minister Bert Koenders. Many countries view the rule of law as something that falls under national sovereignty and are therefore hesitant, he said. 'But this should not be a taboo. 'The Polish minister refused to violate rules, but wants to conduct the conversation.

EU Commissioner Frans Timmermans, responsible for the rule of law, continues the dialogue he has been trying with Poland over the controversial appointment of judges of the constitutional court. 'We feel collective responsibility for the rule of law. That's a good starting point, 'said the Dutchman.