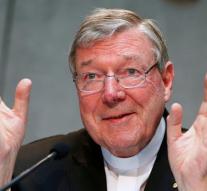 sydney - Police in Victoria has questioned the Australian Cardinal George Pell in connection with the allegations of sexual abuse that are circulating. This happened in Rome, where the former Archbishop of Melbourne has lived since 2014. The most senior Catholic cleric of Australia is in the Vatican's main financial and economic adviser to the Pope.

ABC revealed that three officers, the 75-year-old Pell, with his consent, have searched and interrogated. 'The cardinal has denied all the accusations and will continue to do so until the investigation is completed,' the news Wednesday.

In July, two men told them when young boys were already approached immorality in the 70s and groped by Pell while playing in a pool. Their story is not alone. In the decades that Pell would have been guilty of similar offenses. Which ranged from appearing naked in the locker room of the boys from 'Torquay Lifesaving Club' to sexual harassment against choristers of St Patrick's Cathedral.