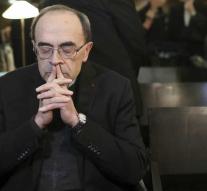 lyon - The Archbishop of Lyon, cardinal Philippe Barbarin, was sentenced to six months in prison by a judge for negligence in a child abuse case.

Barbarin, according to the judge, had to report abuse and abuse of a child in a case that took place in 2014 and 2015.

Barbarin appealed against the ruling, according to his lawyer.