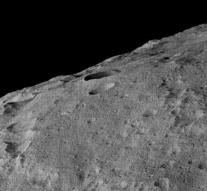 cape canaveral - The Dawn spacecraft NASA has the dwarf planet Ceres carbon compounds discovered are like building blocks for life on Earth. Scientists have published Thursday in the journal Science.

Ceres has a diameter of 950 kilometers, the largest object in the asteroid belt between Mars and Jupiter and is three times farther from the sun than Earth.

The discovery puts this icy and rocky world on the growing list of places in our solar system that are important for research into the origin of life.

Dawn takes almost two years in orbit of Ceres. ' I think these organic molecules are still far from bacterial life, but they do tell us that it is useful to examine further Ceres' said team leader Christopher Russell. Possibly even goes hiding an ocean beneath the surface.