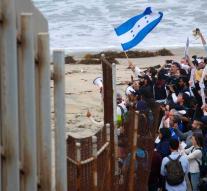 tijuana - A caravan migrant from Central American countries has arrived in the Mexican town of Tijuana on the border with the US. It concerns about four hundred people from Honduras, Guatemala and El Salvador who are now considering the next steps.

US President Donald Trump threatened to withdraw aid funds to Honduras and other countries early this month if they did not stop the so-called caravan. Then it counted another 1200 migrants.

The migrants took a month to travel from the Mexican-Guatemalan border to Tijuana. They now have to decide whether they cross the border illegally, ask for asylum at the border or stay in Mexico. According to US border guards, some have already been caught while trying to enter the country across the border fence.