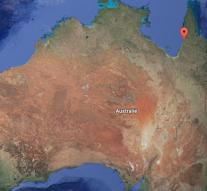 kowanyama - Certainly a person, a woman (48) was killed Friday in northeastern Australia when a car crashed into a house in which at that time was a wake in progress. At least twelve people were seriously injured. The police do not rule out that there was intent on the game, Australian media report.

The incident occurred in the town of Kowanyama, in the state of Queensland. The investigation has only just begun, said Michael Gooiker police, but it seems that there is 'some kind of dispute' preceded the incident at the meeting. The driver, a 55-year-old man who is related to people who were at the vigil, was arrested.

The emergency services have four doctors, ten nurses and deployed a helicopter. Some victims are in bad shape. 'As you would expect with the collapse of a building, there are patients with multiple fractures and abrasions, and possibly those with internal injuries,' said a coordinator of the emergency services.