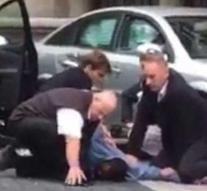 london - Several people got injured when a car on pedestrians rode at the Natural History Museum in London. The driver of the car has been arrested.

After the incident, the driver of the car was grounded by police officers and arrested.