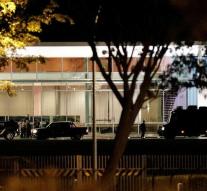 brasilia - A minor boy was wedded in a car at the Presidential Palace of Brazilian President Michel Temer in the capital of Brasilia on Wednesday. Security services arrested the perpetrator. Temer himself was in his other residence at the time.

The boy drove his car through the gate. Guardians fired first warning shots, but when it became clear that the car was not going to stop, it was shot. The car stopped at the complex on which the perpetrator could be charged. He did not get injured.

Local media images show that a white fence is on the ground next to bullet holes.

Temer is heavily under fire in Brazil. The supreme prosecutor has accused the president of Monday for taking bribes. It is the first of a series of heavy charges against the unpopular president expected.