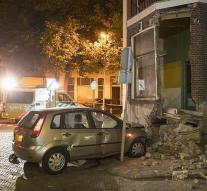 haarlem - Haarlem North tonight havoc created when a man with his car against the wall of a house on the Kennemerstraat drove. Part of the wall of the house came down.

The motorist was injured, reports the Haarlem Dagblad. He was taken to the hospital in Amsterdam.

The man missed the turn towards the French Halsstraat, drove two poles out of the ground and eventually came to rest against the wall. Investigated whether there is a risk of further collapse.