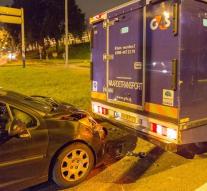 amsterdam - A motorist has been found out in the night of Sunday to Monday, you can not just damaging an armored money vehicle.

The armored car G4S was waiting for a traffic light on the Haarlemmerweg in Amsterdam when the car for unknown reasons crashed behind the car.

The car was heavily damaged and had to be removed by a salvage company. The armored car, which seems to have no dent could just keep driving. An ambulance was still on the ground, but no one had to transport to the hospital.