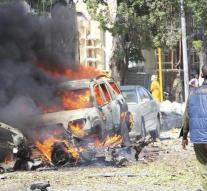 - A car full of explosives Saturday in the Somali capital Mogadishu crashed into a restaurant. At least three people were killed, according to witnesses, the suicide bomber were killed.

Least seven people were injured. Local residents said the restaurant is frequented mostly by members of the internal security services.

The attack was claimed by the Islamic extremist movement al-Shabaab, which previously staged similar attacks in Mogadishu. In a statement, a spokesman for al-Shabaab announced that they had coined by the staff of the nearby prison, where rebels held in underground cells.