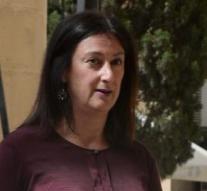 valetta - Malta's best-known research journalist has died when a powerful bomb blows her car. Daphne Caruana Galizia (53) was extremely popular among the inhabitants of the island state.

In her famous blog, she reported on her research. She was busy investigating the corruption in Malta. These were cases involving Maltezer politicians.

The bomb in her car exploded when Caruana drove to Bidnija village in northern Malta. Prime Minister Joseph Muscat called the fatal attack 'a barbaric attack on press freedom.' He immediately announced an investigation. 'Our country deserves justice,' he said.

Muscat was itself the subject of the investigator's research. According to Caruana, his wife Michelle is the owner of the Egrant company in Panama, which caused large sums of money to circulate in transactions with a bank in Azerbaijan. Of that, the woman would have benefited greatly. Egrant is mentioned in the infamous Panama Papers. The allegation did not prevent Muscat re-election.