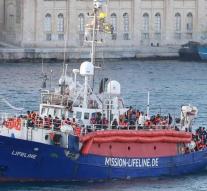 valletta - The captain of the ship Lifeline, from the German aid organization Mission-Lifeline, is being prosecuted by the judiciary in Malta and must be prevented on Monday. The Maltese lawyer of the organization announced this on Thursday.

Captain Claus-Peter Reisch is tried for errors with the registration of the ship. The Lifeline hung a Dutch flag, while the boat officially does not sail under that flag. According to the Dutch authorities, the ship is not registered in the designated land register.

Reisch was interrogated by the Maltese police for the second time on Thursday. He was allowed to float his boat, after days in bad weather on the Mediterranean, to build in Malta on Wednesday evening. He had about 230 migrants on board. Shortly afterwards, Reisch was already questioned by the police.