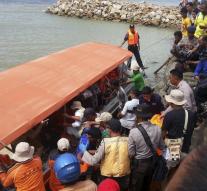 jakarta - More than three days after the disaster on the Indonesian island of Sulawesi, two survivors rescued from the sea, including the captain. Which have let local rescuers know.

The captain was discovered by fishermen and picked up from the sea. Another crew member had clung to a floating fishing net and was removed from the water.

There are certainly still 74 people missing after the capsizing of the ferry Saturday. The bodies of three crew members have been recovered. A total of 41 people are now removed from the water alive.