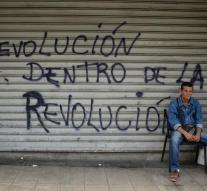 caracas - A candidate for the controversial constitutional assembly in Venezuela has been removed. Unknown shots government fighter José Félix Pineda (39) died in his home in the state of Bolívar, reported the Venezuelan justice on Sunday.

Nearly 20 million Venezuelans can cast a vote on candidates for a 545 member council who can conduct far-reaching political reforms. In the polling session, months went ahead with demonstrations against the government, bringing about 115 people alive.

The election is boycotted by the opposition, who sees the ballot box as a trick to further expel parliament. Electors can not vote for or against the council: they can only vote on predominantly governmental candidates.