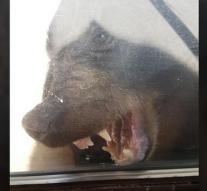 gibsons - A Canadian man forced a black bear to hit his nose because he had been following a toddler. When the toddler entered his house in the Canadian Gibsons, located in the province of British Columbia, the animal followed him. The mother who was at home with her two sons, suddenly heard her son shouting. 'Mom, look!'

Below, Elery Froude saw the bear standing in front of a window. She decided to shut up with her children in a bedroom, while a family friend began to hit pots and chase the bear with a chair.

'My first thought was,' Oh my god, what should I do now? 'Then my friend suddenly said that we had to go to the bedroom, Froude told CTV News.

The bear visited several rooms in the house. 'He even drove over the dining table,' said the police. When the bear stood in the doorway, the friend and the beast looked at each other. The man then pulled out, leaving the bear out.

Outside, the bear scratched the door. The animal also hit a screen.

When the police arrived on the ground, agents made a lot of noise. The bear was driven into the bushes by throwing water bottles on it. Still, the bear tried to come back, this time through the garage.

The beast of about one hundred kilos ran behind a man who quickly entered a car. Then the police decided to bring the animal, because this was not clear why the beast was so aggressive.

The Canadian province of British Columbia has one of the largest populations of black bears in the world. It is estimated that there are between 120,000 and 150,000 black bears.

Every year around 1000 black bears are being killed in Canada because of conflicts with people.