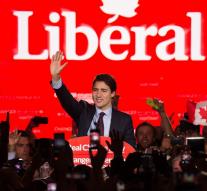 ottawa - Canadian Prime Minister Stephen Harper on Tuesday conceded defeat. The Conservative Party of Prime Minister has substantial loss in the parliamentary elections on Monday. The Liberal Party is the profit hurried away, and probably , the new prime minister : Justin Trudeau .

According to the latest figures, the Liberal Party has 175 seats, while the Conservatives stuck at 95.

The New Democratic Party (NDP) has 31 seats in possession. Harper not only stops as prime minister, but probably also as leader of the Conservatives. It has announced his party. Harper was prime minister of Canada since 2006 and was re-elected twice.

Liberal Justin Trudeau is the intended new prime minister. Trudeau promised in his first speech " real change " in Canada. " We have beaten fear with hope, cynicism with hard labor and negativity with a positive vision, which brings together all Canadians. "