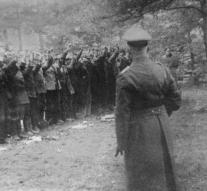 ottawa - Helmut Oberlander, who has admitted that he was a member of an Einsatzkommando during the war, the Canadian court Thursday in Ottawa has received a significant boost. The court refused to deal with an appeal of the government, which Oberlander Canadian citizenship does not seem to be jeopardized.

The now 92-year-old Oberlander being chased by the government for two decades. He failed to mention namely his emigration in 1954 and naturalization in 1960 that he had been a member of Einsatzkommando. These groups murdered in Eastern Europe behind the front tens of thousands of Jews, communists, partisans, intellectuals and gypsies from. Oberlander was on the list of most wanted war criminals by the Simon Wiesenthal Center.

Helmut Oberlander was in 1941 in the Okeraïne and Einsatzkommando connected. He explained later, when his actions became known that he had worked only as a translator and never participated in killings.