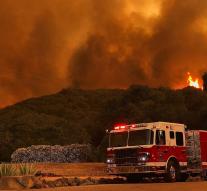 - The British West Coast fire department warns of expanding forest fires, which have been raging since the weekend. Strong winds and lightning strikes can further fire the fire on Wednesday and spread at high speed to Williams Lake, fearing the authorities.

The approximately 10,000 inhabitants of the city have to prepare to leave their homes. So far, 14,000 people in the province of British Columbia have been evacuated as a result of the fires.

In the predominantly rural region, approximately 220 fireplaces are estimated. Around the thousand firemen have been deployed, they get help from other provinces. The CBC station reported that many homes were destroyed. Also, multiple roads are not viable.

The police said ten people had been arrested on suspicion of looting of vacant apartments.