Home / World / Canada wants to get rid of coal energy 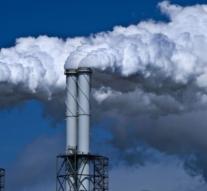 ottawa - Canada wants to be off for 2030 the traditional energy production by burning coal. That Environment Minister Catherine McKenna on Monday in Ottawa told the national media. Currently, coal-fired plants provide about 10 percent of total greenhouse gas emissions in the country.

They are in Alberta, Saskatchewan, Nova Scotia and New Brunswick. Those provinces have to choose now between closure and transition to more environmentally friendly generation of electricity or the use of technologies for the storage of carbon dioxide and particulates. The Canadian government has pledged to ensure that by 2030 90 percent of the energy is clean. The share is already very large, with hydropower, solar panels and windmills.

The communication McKenna comes just after neighbor Donald Trump as an elected American president has promised to remove a range of environmental and energy policies and the coal industry to revive. ' We will give the world a clear signal that Canada is a wonderful country with so much to invest in environmentally friendly technologies, '' responded McKenna.