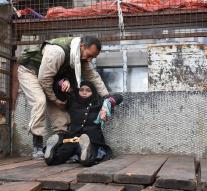 aleppo - Evacuating people from the heavily damaged areas in the east of Aleppo seems again to get going. A spokesman for the Syrian rebel movement Jabha al-Shamiya, fighting against President Assad has said on Wednesday that another truce was agreed. Which can be put into effect within a few hours, after which victims early Thursday morning can be brought to safety.

In turn, the rebels in two towns they besiege in the province of Idlib for free passage. The military alliance which supports Assad, confirmed the deal, which 15 000 citizens who can leave under fire. The injured first.