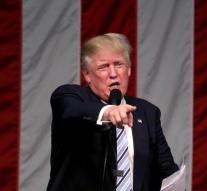 - Paul Manafort, the campaign manager for Republican presidential candidate Donald Trump has received cash payments for years of former Ukrainian President Viktor Yanukovych. It would be a total of $ 12.7 million, paid between 2007 and 2012, reports the New York Times Monday.

Manaforts name has surfaced in a handwritten list of black payments Yanukovych's pro-Russian Party of Regions, which is being investigated by the new National Anti-Corruption Bureau of Ukraine. The American did consultant work years for that party. In the book are also bribe payments to election officials in Ukraine.

The book was found in a former headquarters of the Party of Regions. In addition, there were two safes that were stuffed with bills of $ 100.


The issue of cash payments casts a different light on the campaign of Trump, the newspaper said. Trump dropped recently in admiring terms about Russian President Vladimir Putin.